The International Award Bronze and Silver teams triumphed last weekend in a successful Final Expedition to Perquin. Our students navigated a three day triangular route, taking in the river valleys to the North of Perquin town, the amazingly open country underneath Cerro la Crucita and then plunging down into the Rio Sapo valley. The last section involved winding back up around the stunning Pericon mountain peak before descending into Perquin.

The guide spoke of a wild puma spotted with cubs three years ago near our first campsite, where the rain tested the teams ability to act as a team in difficult circumstances - all hands acted together to try and keep equipment and bodies dry through the night. Rachel Keslake demonstrating considerable engineering talent, using squares of plastic sheets cut to size with a pen-knife to boost the 'rain and wind resistance' of the bronze team tent. As the team was carrying all of their own food for the three days, the packing skills of Fernando Chahin came into the light as an inexhaustible supply of snacks sustained his team through the difficulty of putting a tent up in the rain. As the storm lashed heavy rain down on our party in the afternoon, the muddy bank we were climbing began slowly to collapse and we relied upon the combined muscle power of Jonathan Keslake, Guilhermo Chavez and Roberto Diez de Pinal (the human chain) to pull us to safety.

In the morning we awoke to find we had a 12th party member, this one had four legs. A small brown and intensely likable dog watched over our breakfast proceedings with great approval and before long had acquired numerous names from the team including Bingo, Dingo, Window, Gringo and less appealingly - Bimbo. There is no rule against dogs doing the international award, and after eating several pancakes (only one of which was meant for him), Bingo evidently decided to cast his lot in with us and remained by our side, day and night, for the rest of the expedition. On this day the navigational skills of both teams were tested severely as they used a map and compass to cross the high plateau stretching from Cerro de Crucita down to the cliff which marks the edge of the Rio Sapo valley. Isavel McGough and Rose Guilano showed remarkable tenacity in finding a way through the endless criss-crossing animal trails and the party celebrated a noisy reunion at the edge - with much barking from Bingo. At the end of the day the urgency of a second rainstorm approaching accelerated our fording of the Rio Sapo. The river was understandably high and it took us quite a long time to find a safe place to cross. In the process we disturbed an iguana who ran past us at terrific speed. The crossing necessitated Jonathan, Roberto, Fernando, Raul and Guilhermo to form a human chain on stepping stones across the breadth of the river and they showed great team-work, courage and fortitude as they guided each item of equipment and human body to safety and then helped each other to shore. Only Bingo remained on the far bank, crying piteously and refusing help. In the end we made to leave him behind but with a sudden dash he leapt to the first rock and somehow skittered across the channel in a display of 'doggie-gymnastics' which was almost Olympic in standard.

At night the crew celebrated by huddling round a small fire and cooking an Australian outback delicacy called 'Damper Bread', which has been a tradition of this year's crew. Songs were sung of variable quality and everyone warmed up after a very satisfying swim in the Rio Sapo. The hike up to Pericon involved some serious jungle bashing and the boys used their machetes to help clear a way. Several times the party crossed fences of barbed wire, trusting in each other to avoid injury and guiding others as they crossed over, under and through the gaps. At one point a rest stop was interrupted by an angry group of wasps who attacked the group but because of our tough walking gear and Raul's early warning they were unable to sting a single person. At one point the trail became a steep mudslide and the group had no option but to sit down and enjoy the ride. The views at the top of Pericon hushed us all to silence, and then the teams yodeling skills were employed to communicate to the world that the ABC team had nearly made it, Bingo was inseparable to the end, as we said our goodbyes at the bus he whimpered and refused to leave. We waved goodbye to Perquin Lenka and then realized that the bus was being followed by a running dog.I am not sure what happened next but the next time I looked around while Bingo was sat on the back seat with the boys eating sausages. (Does anyone want to adopt an exceptional dog? Guilhermo Chavez (11) is looking after him for now). A very well done to the ABC International Award teams for Bronze and Silver this year!
Posted by Anonymous at 07:53 No comments:

We received news this afternoon that the International Award group have made their Saturday night camp and all is well. They have had a good day despite some rain!
Posted by Anonymous at 16:02 No comments:

Second grade had an exciting day!  A few weeks ago when they were learning about Active Planet, the made some emergency packs during their exit point.  They wanted to donate the emergency packs to help their community in case there is a natural disaster.
Today a representative form FUSAL came and briefly explained to the children about the work this organisation does whenever there is a natural disaster in our country.  The children were able to donate the emergency packs!
Posted by Edda Padilla at 15:19 No comments:

Last Friday, Primary's link with the Salvadorean Olympic Academy continued. Once again Geovany Delgado promoted the Olympic values with Softball as the catalyst. Grades 2 and 3 were given a fun packed talk about Olympic Values and were then able to practise some softball skills under the guidance of Francisco Pocasanngre (National Softball Coach) and three members of the Juvenile National Softball Team (David Lòpez, David Valle and Jonathan Jovel). The event was so popular that Grade 1 Teachers asked if the session could be extended to include Grade 1 also. This was no problem for the Athletes. These events have proved extremely successful this year, and have opened the children's eyes to different sports, and, hopefully, the children may ask you, their parents, to let them have a go at these sports. Therefore, we hope to continue these events next year, as they have proved extremely successful.

Posted by Ian Truscott at 13:15 No comments:

We had a very busy lunchtime today


We had a very busy lunch time today with current Harvard student Manuel Melendez from the Class of 2011 talking about university entrance to Grade 11. Meanwhile the final of the school Knowledge Bowl tournament was taking place and the winning team was the Aztec 8 team. In the Auditorium the 5 a side football tournament was continuing.
Posted by Anonymous at 12:57 No comments:

Visit from the National Fencing Team

Today we had a visit from the members of El Salvador's Fencing Team as part of an IPC activity for our 5th Graders. It was great fun for everyone! Some children and faculty members even got the opportunity to try it out themselves... 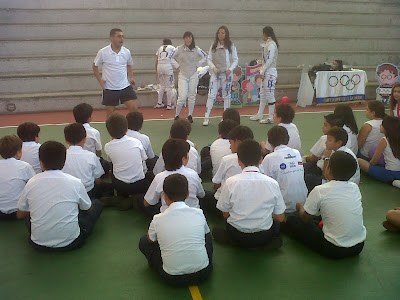 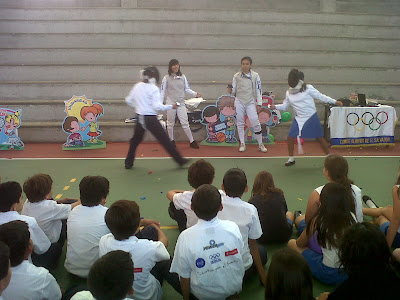 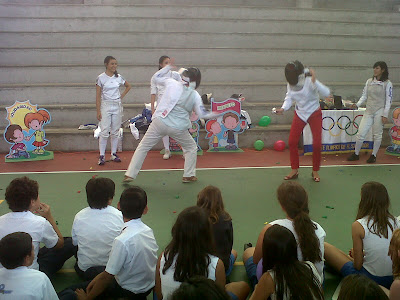 El IMPOSSIBLE
= POSSIBLE
On the 28th of April, 2012 The ABC International Award group became the first school expedition team in El Salvador to cross the El Impossible park. This dramatic route traversed the wilderness area (famous for extreme topography), from south to north following trails, animal tracks, and contour lines. The journey has only been completed three times in recent memory, twice by professional game scouts…. yes, you guessed it, the third time was us. Special permission from the park was granted to pass through areas under maximum legal protection. The actual crossing took place on Saturday 28th of April 2012; This journey of approximately 11 hours tested their endurance, preparation, teamwork, spirit and overall; Determination to succeed.  The team also conducted a night survey of animals in the park and ended by walked through the coffee plantation area into Ataco on Sunday 29th.

The 8 students involved were:

Posted by Anonymous at 08:29 No comments: