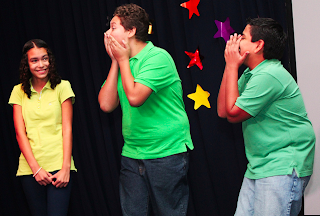 The ABC held its very first ABC Digital Oscars Award Show last week. A great deal of student and staff effort went into this as they busied themselves filming, organising, producing and rendering videos, and it paid off. Ticket supplies were exhausted hours before the event, and the Performing Arts Centre looked spectacularly glamourous, bearing little resemblance to the exam room it had been just hours before. Parents and students began arriving quite early to vie for one of the special candlelit tables, while excitement and anticipation swelled.

During the event student work from 5th to 12th grade was spotlighted and rewarded, to screams of delight and hardy applause, while superb artistic interludes took place between categories.

It was a great evening which we hope to build on for school year 2011/12, a year for which we have new and exciting plans for further student digital video work.

Please visit the LRCABC YouTube Channel to view the videos including the Best Movie of the Year award, Pre-show Interviews and the Grand Finale.

If you would like to read more you can do so on the LRC Newsletter this Friday.
Enjoy!